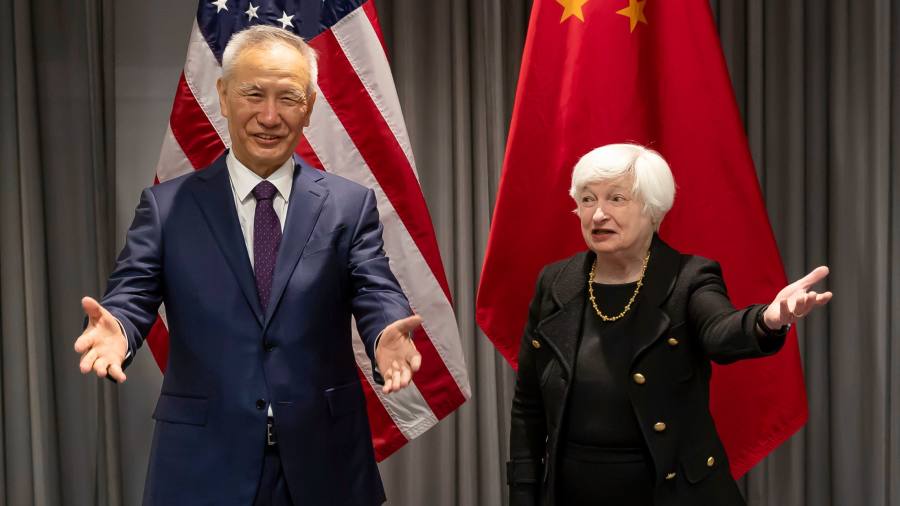 China has said it would welcome a visit by Janet Yellen this year after the US Treasury secretary met vice-premier Liu He in Zurich, marking the first top level economic meeting between the powers since Joe Biden took office.

The meeting, which comes as US-China relations remain fraught over issues from Taiwan to trade and technology, was described by both sides as “candid”. In separate statements, both sides sought to ease concerns about a further deterioration in ties between the world’s two largest economies.

Chinese state-run news agency Xinhua said the two officials agreed in a three-hour meeting that their economic and trade teams would “continue to maintain communication at all levels” and that Beijing would welcome a visit from Yellen “at a suitable time this year”.

The Treasury said both sides agreed that it was “important for the functioning of the global economy to further enhance communication around macroeconomic and financial issues”. It added that Yellen “looks forward to travelling to China” and to welcoming her Chinese counterparts in the US.

The Zurich talks comes two months after Biden and President Xi Jinping held their first in-person meeting as leaders at the G20 in Bali, Indonesia. The two tried to halt the deterioration in relations that reached a new low when China held huge military exercises around Taiwan in August.

Secretary of state Antony Blinken will travel to China in early February, in what will be the first visit by a US cabinet official in more than two years.

But tensions have remained elevated since Bali. In December, the US added three dozen Chinese companies to an export blacklist in a bid to prevent them from obtaining high-end American technology. That came two months after the US introduced sweeping new rules designed to make it much harder for China to obtain, or produce, high-end semiconductors.

The Zurich meeting came one day after Liu spoke at the World Economic Forum in Davos where he reassured the business audience that China was mostly “recovering to a normal state of affairs” following its recent abrupt end to its zero-Covid regime. Yellen did not attend Davos.

As the US and Chinese officials met, UBS chair Colm Kelleher said at Davos that a deterioration in US-China ties remained one of the biggest global risks, particularly an “event that could cause a geopolitical deterioration on the America-China relationship”. He sparked controversy last year when he told a forum in Hong Kong that global bankers were “very pro-China”.

JPMorgan’s investment banking chief Daniel Pinto said on Tuesday that US-China tensions appeared to be easing with better communication, and as officials in Beijing and Washington focused more on domestic issues.

Kurt Campbell, the top White House official for Asia, said last week that the two countries were trying to set a “floor” under the relationship. But Biden’s China policy is expected to attract scrutiny from Capitol Hill after the Republicans took control of the House of Representatives this month.

In a separate discussion at Davos on Tuesday, Carmine Di Sibio, EY chief executive, put his level of concern about a potential decoupling of the US and Chinese economies at nine out of 10. He said companies were trying to convince the US administration that “we need investments from China, we need to invest in China”.

However, Anne Richards, chief executive of Fidelity International, said the realisation that a complete economic decoupling would be catastrophic “means that there is a genuine desire on both the US and Chinese side to find the areas where co-operation can happen”.

Yellen’s meeting with Liu came as she prepared to visit Senegal, Zambia and South Africa. She has criticised Beijing’s approach to debt relief in defaulting developing economies, saying that “the barrier to making greater progress is one important creditor country, namely China”.