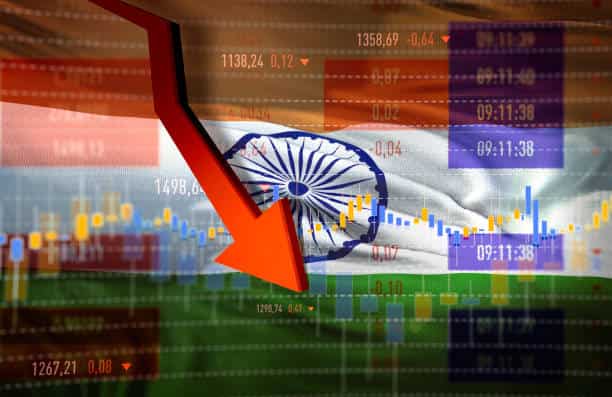 Indian equity benchmarks Sensex and Nifty50 dropped as much as 1.5 per cent in volatile trade on Wednesday, ahead of the expiry of monthly derivative contracts due at the end of the session. Mixed moves across global markets gave Dalal Street investors little to cheer about ahead of a key GDP reading from the US due on Thursday, a market holiday in India on account of Republic Day.

The Sensex shed 897.4 points to 60,081.4 at the weakest level in intraday trade, and the Nifty50 sank to as low as 17,846.2, down 272.2 points from its previous close, amid a sell-off across sectors. Losses in financial, IT, oil & gas and FMCG shares were the biggest drags on both headline indices.

Investors lost Rs 3.7 lakh crore worth of wealth in a day as the market capitalisation of BSE-listed companies decreased to Rs 276.7 lakh crore on Wednesday, according to provisional exchange data.

Overall market breadth remained in favour of the bears throughtout the session, with an advance-decline ratio of 1:2 at the close as 1,128 stocks rose and 2,387 fell on BSE.

Widespread selling pressure in banking majors as well as heavyweights such as Reliance and L&T is weighing on investors’ sentiment, according to Ajit Mishra, VP-Technical Research at Religare Broking.

Here’s a look at key factors at play on Dalal Street:

Fears of a recession in the world’s largest economy and a spillover to other major economies hurt investor sentiment, say analysts.

“Concerns about the US economy falling into a recession remain persistent, further supported by uninspiring US statistics,” said Himanshu Srivastava, Associate Director-Manager Research at Morningstar India.

Analysts attribute the high volatility in the market primarily to the expiry of January F&O contracts due at the end of the trading session.

“There is no trigger, but the market is looking nervous ahead of the presentation of Union Budget in Parliament and is following last year’s pattern… In 2022, the Nifty made a doji candle in the second and third weeks of January, followed by a sharp fall in the final week of of the month,” said Santosh Meena, Head of Research at Swastika Investmart.

Foreign institutional investors continue to avoid switching to buy mode in a big way on Dalal Street. They have pulled out a net Rs 15,236 crore so far this month, according to provisional exchange data.

“Sustained selling by FPIs is a bit surprising since the dollar index has been steadily declining,” said VK Vijayakumar, Chief Investment Strategist at Geojit Financial Services.
The dollar index has declined from a 2022 peak of 114 to around 103, he pointed out.

Many analysts point to a slew of disappointing earnings from India Inc. IT Heavyweights such as Wipro, and HCL Tech among others reported marginal growth on a sequential basis in Q3.

“Although we started the third quarter on a shaky note, the latest set of financial announcements from IT and banking blue chips are encouraging. Given the mixed undercurrents, the second line of Q3 and global market cues will dictate the trend on the Street,” said Vinod Nair, Head of Research at Geojit Financial Services.

Tech giants including Google, Amazon and Microsoft have announced layoffs, further fuelling fears of a recession. Swiggy, Dunzo and Wipro are also among the companies that have announced job cuts.