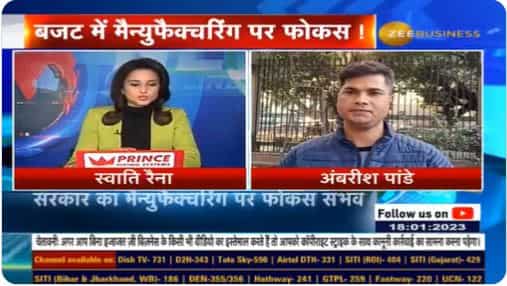 The government is also expected to make provisions for additional allocation of up to 20-25 per cent. He said that government has identified sectors where it wants to increase production and is now focusing on it.

There are at least 6 sectors in which announcements could be made. These sectors likely are speciality steel, speciality chemicals, IT hardware, fertilizers, aviation and technical textile and others.

The government intends to focus on goods on which country’s reliance on imports is high. The government is also focusing on manufacturing those goods in the country whose demand in overseas markets is high.

The government could bring a PLI scheme for manufacturing on niche batteries. Zee Business had recently informed about this development. The plan is to bring a separate PLI scheme for this. The government wants the industry to make batteries from metals other than nickel, cobalt and lithium. It has urged the industry to manufacture batteries with new metals and technologies so that country’s imports of these metals remain low.

This is expected to not only help India become an export hub but will also create jobs.

In another major development, the government could extend timeline of 15 per cent corporate tax levy beyond 31 March 2024 in the upcoming Budget 2023, Zee Business’ Tarun Sharma reports citing his top sources. The tenure could be extended by one more year. In 2019 budget, the government had introduced a new scheme under which manufacturing companies who get registered on 1 October or later will get benefit of a lower corporate tax of 15 per cent.

This was in view of promoting the local manufacturing industry and the original deadline was to expire on 31 March 2023. However, Finance Minister Nirmala Sitharaman extended it by one year.