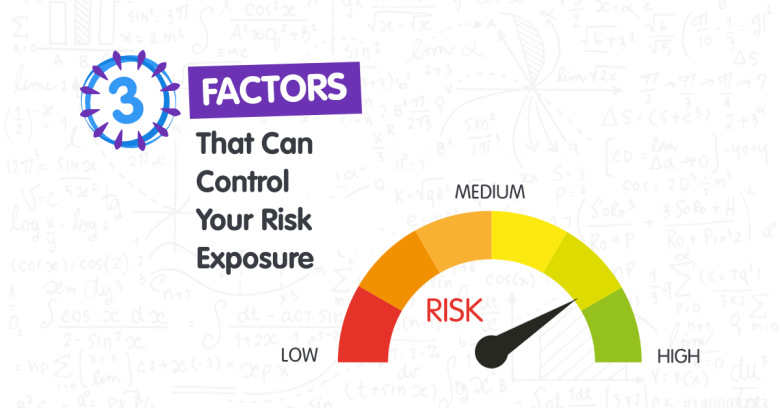 Have you ever had trouble telling when you should cut losses?

You might have experienced the markets going against your trade and then suddenly you’re praying to your trading gods that price would turn.

Then, when you (or your account) have reached your pain threshold, you end up closing at the top or bottom.

Either that or you decide that you’ve “learned” from the last time you closed a losing trade and opt to “wait it out” until your account cries uncle.

If the scenario above sounds familiar to you, don’t worry. The problem is much more common than you think.

It also tells us one important thing:

Your risk exposure is bigger than your risk tolerance.

A lot of traders spend most of their time finding out what to trade and where to enter, but only give a passing thought to the amount that they risk and when and where to exit a trade.

The problem with this habit is that you could be unintentionally sabotaging your trade by exposing yourself to more risk than you can handle.

A thrill-seeker, for example, would have a different risk tolerance than that of an introvert who can only stand volatility in small doses.

Unless you’re trading a big account or you already know just how much risk per trade fits your trading personality, then it’s likely that you’ll end up taking more risk than you’re comfortable with.

As a result, your decision-making processes are compromised by your fear of being wrong and you end up making newbie mistakes.

Nobody likes to lose. But the markets are random and you are only human. You will be wrong a lot of times and losses will happen frequently.

So if you can’t control how many times you’ll be on the wrong side of the trade, then the least you could do is to CONTROL YOUR RISK.

There are dozens of factors affecting risk exposure, but let’s concentrate on three that we can easily control:

Large position sizes lead to large volatility in your profit/loss statement. A single pip movement would mean more to a bigger position than a smaller one.

If you trade big position sizes, then you’re more likely to worry about making a dent on your account than how you’re executing your trading plan.

Your position size per trade should reflect your confidence, either in yourself or in your trade idea. Choose a size that’s big enough to matter, but small enough so that you won’t mind if it ends up as a loss.

If you’re not too sure about your trade idea or if you’re already dealing with a lot of trading psychology issues, then it’s best to start small and work your way up.

A trader–let’s call him Jack–once told me that a long-term trade is just another term for a short-term trade that’s currently in the red.

Not surprisingly, Jack is no longer trading.

See, the longer you hold on to your trade, the more volatility it gets exposed to.

Remember that a longer holding period is equivalent to an increased position size, as it exposes a trade to a wider range of possible price movements.

Set a time limit for your trades and be firm with your schedule.

When you hold on to a trade for longer than you initially planned, then you’ll subject your open position to more catalysts than you’ve prepared for, making you more vulnerable to making emotional decisions and classic trading mistakes.

Some traders make up for trading large position sizes by placing tight stops. Others tend to adjust their initial stops, use wide stops, or ignore the idea of stop losses altogether.

The first scenario exposes your account to death by a thousand cuts, while the second strategy makes your account vulnerable to a small number of trades that could wipe out your profits.

Remember that stop loss is your friend. It tells you when you’re wrong and, since you’ll be wrong often, it’s better that you get used to having a proverbial canary in a coal mine.

I’m not saying you shouldn’t use the strategies above. They’re popular for a reason, after all. Just make sure that your stop-loss strategy fits your trading personality and that, at the end of the day, your winners are still bigger than your losers.

In forex trading, being able to trade for another day is more important than getting winning streaks. After all, it’s tough to win a game if you’re knocked out of it.

Learn to control your risk exposure and you’ll be one step closer to becoming consistently profitable.